Skip to content
April 26th Poison Spring H95 to Crescent Creek 10.5 miles
The temperature dipped and it poured down as we tried to hitch out of the tiny town of Hanksville 17 miles back to where we left our hike. We soon gave up hitching and retreated back to Stan’s diner for some mid morning coffee. That then turned to lunch!! Luckily the skies brightened a bit after lunch and we finally got a lift from two guys driving down to Lake Powell to repair their boat.
Loaded up with 9 days food for this long stretch to Escalante, we took it slowly, but there were great views upwards to the snowy mountains and back to the extensive plains to the east. After navigating around Butler Wash we headed back up on jeep tracks in pinyon juniper before hitting tall ponderosa pine and ghostly white aspen.

Some cobalt blue bluebirds fluttered around in the trees. We hiked on a big muddy dirt road from recent active mine workings and were glad to escape from it to find a pleasant grassy camp site near Crescent Creek nestled amongst aspen. Five wild turkeys strutted past and disappeared into the bush.

We enjoyed a wonderful burrito and taco from town for dinner as we listened to the drumming of hail on the tent outer as well as the sound of thunderstorms. We read about Norwegian explorer Nansen’s polar exploration though and our little bit of cold weather seems like nothing compared with his hardships!

Nice day. We awoke to a white snowy scene in the morning. There was wild, windy, cold weather above the cover of our aspens and we chose reluctantly to bypass the Hayduke route over the south summit of Mount Ellen by skirting the mountain to the south and west on jeep tracks.
It was rather lovely though with crisp air and woodpeckers rat-tat-tatting in the trees. At Copper Ridge we tried to head back west onto the mountain ridge but were beaten back due to high winds and biting hail and spin-drift. Oh well another time -we simply didn’t have enough clothing to withstand that sort of weather!

As we circled the mountain, the temperature increased a little and the jeep track turned into gloopy, gooey mud making for tricky going. Our high point was about 9,200 feet before we started to descend onto the northern slopes of the Henry mountains. 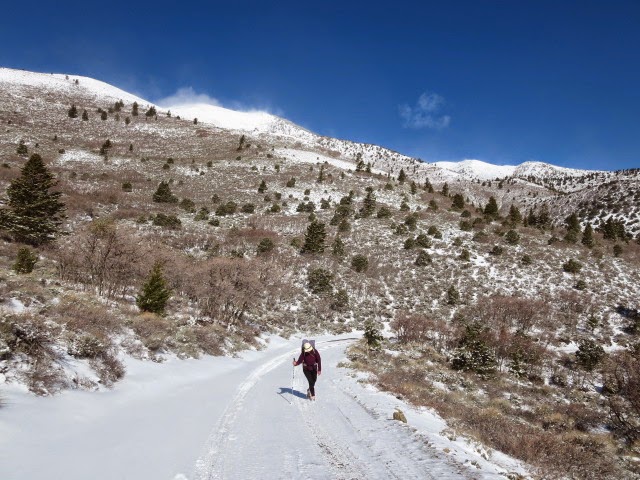 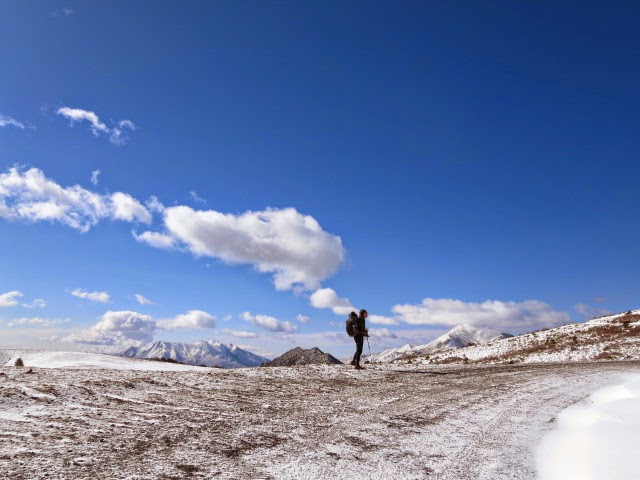 Lunch was at the sunny, grassy meadow of Airplane Spring at 7,665 feet which made for a warm pleasant stop. We relaxed near the memorial plaque for a crashed airplane here with its dry water spigot. However we found water eventually about 300m down (westwards) the track in a trough.
From here we descended further into drier mesa country on more dirt roads to meet up with the Hayduke again. There were a couple of steep climbs but the track generally meandered easily south west. The mesa is a shelf sloping gently down westwards before dropping over a couple of cliff bands to the Waterpocket fold -our destination tomorrow hopefully-which looked great ahead. Views back to the sparkling snowy Henry’s were impressive too.

The 7 mile dirt road of Tarantula Mesa wore both of us out a bit and we are glad to reach the second of two solar panel water troughs in the evening to pick up water and camp a few hundred meters away amongst juniper for shelter.
April 28th Tarantula Mesa to Swap Canyon 11 miles

We woke up to cold wind and clear air. Today we were due to drop into wild country with some tricky navigation down through cliff bands and complex canyons. After a short dirt track we headed cross country through the juniper looking for the cliff edge drop off. We were pleased to pick up some welcome cairns at the top of the cliff and then scrambled steeply downwards on ledges and rock.

After a traverse left, we dropped down a dusty rubble chute to the canyon bottom made of soft bubbly clay.The going was easier for a while along the Muley Creek’s dry gulch bottom before we headed into tremendous arid country south west across undulating benches. We ground to a halt trying to find a trail on our map and had to retrace our steps and resorted to the GPS for a bit before picking up the faint path traversing benches.

Another gulch with some wicked quicksand(!) wound its way down towards surface water amongst thick reeds at a canyon junction. We had a fair amount of drinking water left from last night and decided not to bother with the fairly cow infested water here abouts.

We stopped for lunch in the shade of a cottonwood near the water though with hummingbirds zinging around and a dead buffalo which added to the scene.

The Hayduke route takes a loop north west and then south from here and we chose to take a more direct but interesting alternate described by Nicolas C. Barth called Below Tarantula 2.

We passed what looked like a coal seam and followed some dry drainage’s upwards before a steep scrabble back to meet up with the Hayduke route (although the Hayduke itself is also cross country here!).
More complex rocky terrain followed before we found another key scrambling descent with the odd cairn into Swap Canyon. From here we had easy navigation down the wide gulch to a pool of water which looked like a good stopping point. Although it was early at 4.30 we were able to have a clean and it meant that we could hike tomorrow to the next water source at Muley Tanks 19.5 miles away without carrying overnight water. 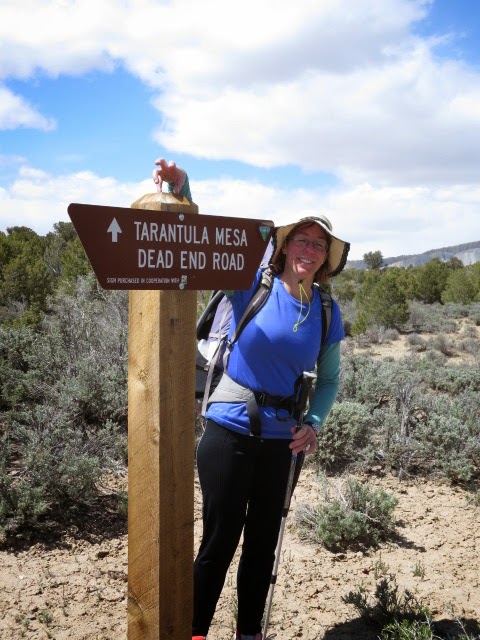 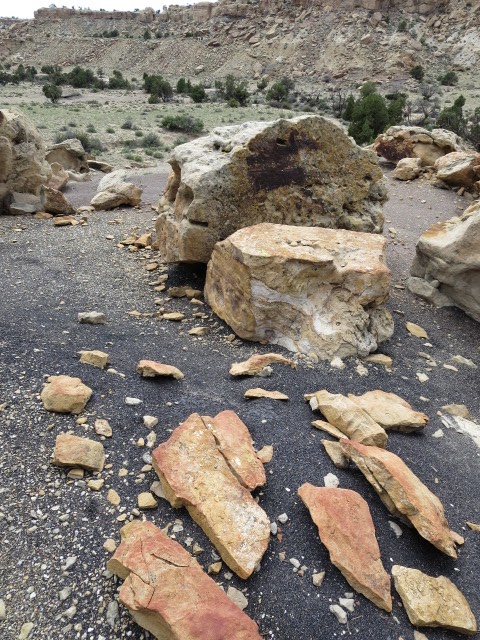 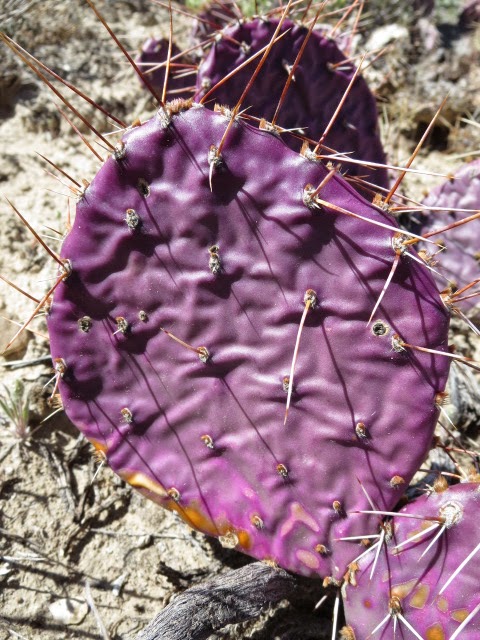