Wednesday 12th October 2016 Salt Creek  canyon lies in the south east of Canyonlands National Park and is unusual in that it holds a good flow of water in this dry part of southern Utah. Anasazi and Fremont Indians lived and farmed in this canyon centuries ago and have left behind well preserved rock art and dwellings making for a fascinating mix of canyon scenery and culture.

We had heard of Salt Creek previously as it is part of an excellent alternative route to the Hayduke Trail. When we passed by in 2014 however, we chose another variation on the north side of the Colorado river which fitted in better with our kayak journey down the Colorado.

This was now our chance to visit Salt Creek, and without the need to hike longer daily mileages that were required for the Hayduke, we would be able to spend time exploring the cliff dwellings and pictographs!

We popped into the National Park office at Needles District Visitor Center to pick up our permits (camping numbers are restricted here) and our mandatory bear canisters.  Black bears roam 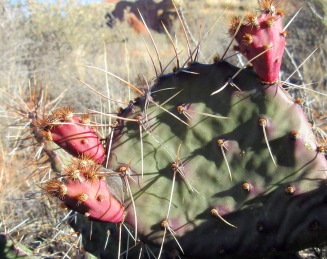 around the higher ground in this area and drop into the canyons in autumn in search of food in the form of cactus fruit.

The canisters felt heavy and were awkward initially to fit into a backpack but, if they keep the bears out of our food and most importantly, protect the bears from getting accustomed to human food, then we were happy to take them!

First we had a 20 mile drive south down a bumpy dirt track to our trailhead at Cathedral Butte amidst open pinyon juniper on a high plateau at 2,400 meters. At 5pm we set off on foot down a good trail into the canyon amidst the colourful striped red and white Cedar Mesa sandstone rock layers. 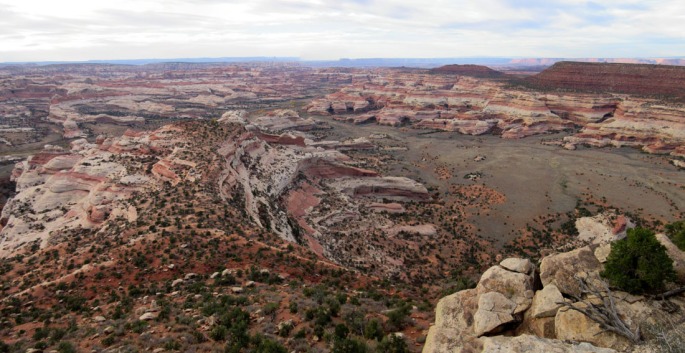 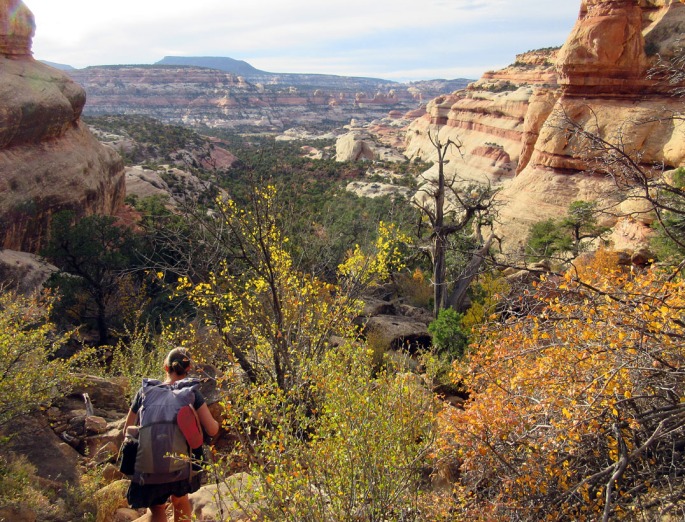 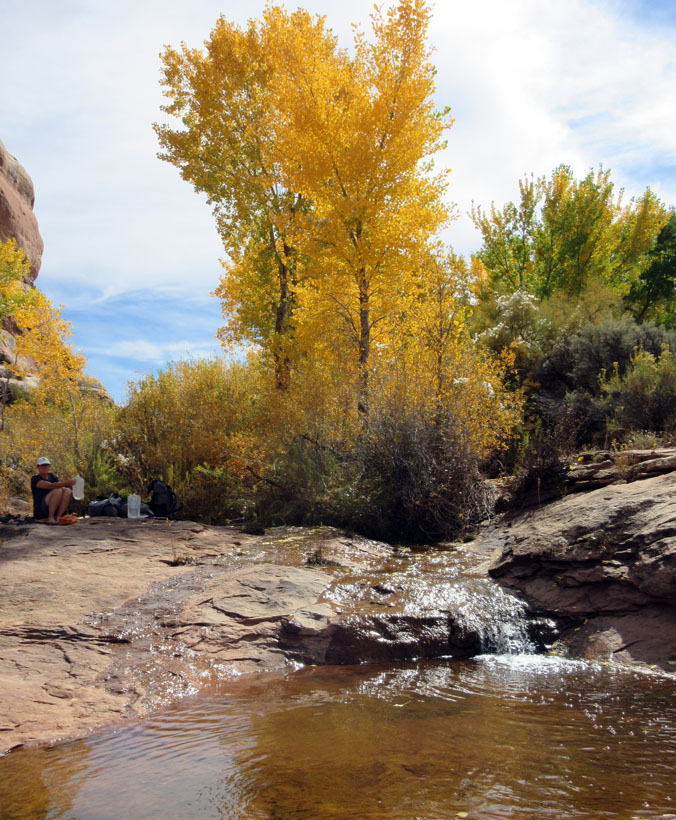 Thursday 13th October 2016 An excellent moonlit night with our first howling coyotes of the holiday – superb! It was cold overnight but the sun eventually hit the tent and warmed us up pretty quickly… 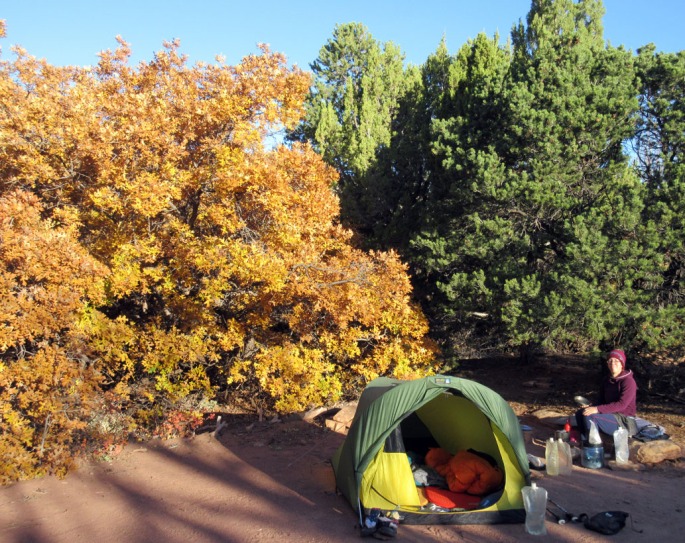 We hiked back to some meadows and explored  ‘Kirk’s Cabin’ nearby, a cool wooden structure dating from around 1890…. 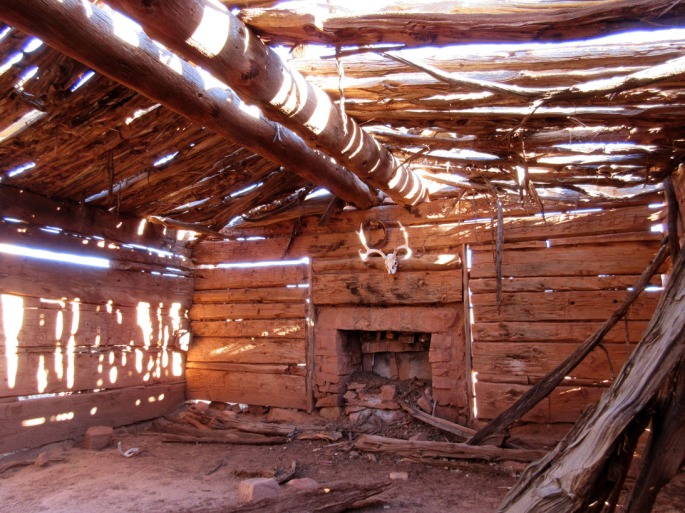 Next we hiked north up the canyon on pretty good trails – first hitting a granary structure with about 4 buildings at the foot of a cliff. Onto the ‘Big Ruin’ from there which was maybe 15 minutes west of the trail and a long line of granaries 20 meters up from the ground on a horizontal cliff ledge. Pottery shards and corn could be seen at the foot of the east facing cliffs and we were happy to explore around here for a while in the now hot sun. 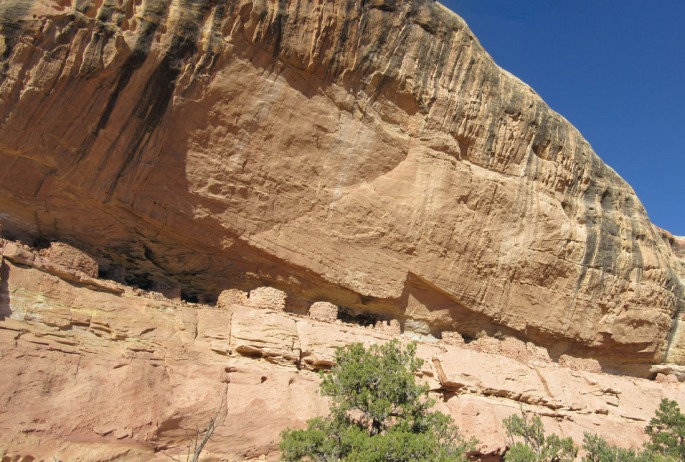 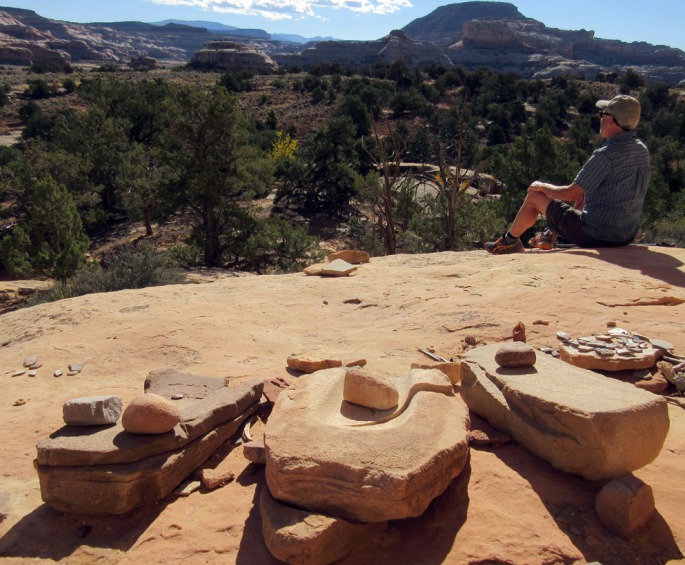 We hiked on, mostly through huge sagebrush and rabbit brush but occasionally with thick willow and tamarisk thickets. One of the most interesting sights of the day was ‘squash granary’ where some granaries sat under a huge overhang. Squash plants were growing there, presumably having lasted 700 years since the area was originally farmed- nice! Like almost all of these Anasazi locations it was a beautiful spot too. 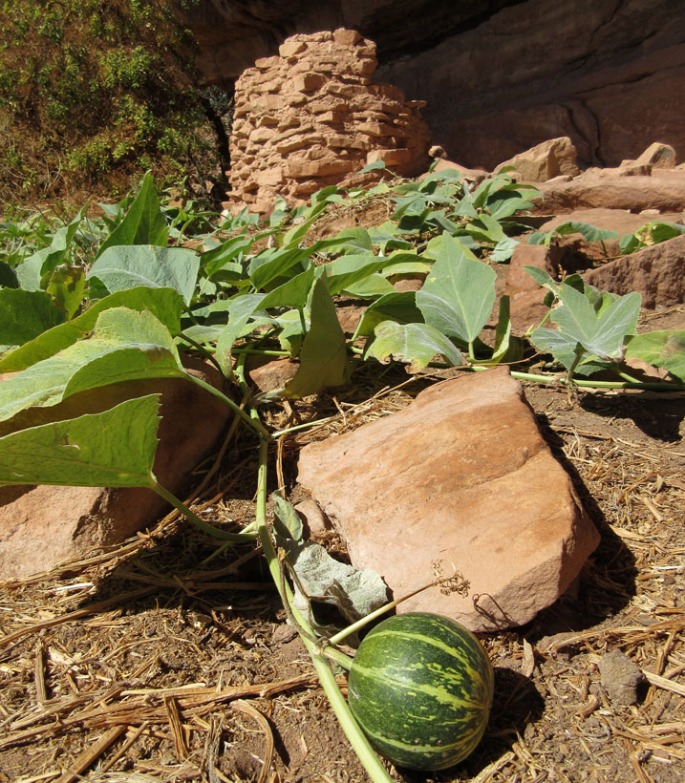 Further on we stopped at ‘All American Man’, a red white and blue coloured pictograph in another amazing location in a cave about 10 meters above the valley floor. This iconic site was better in real life than the pictures we had seen beforehand given its situation. The artwork looked a bit weird though – is it really 700 years old?

Looking out from inside the ‘All American Man’ cave. ‘AAM’ itself on the right! 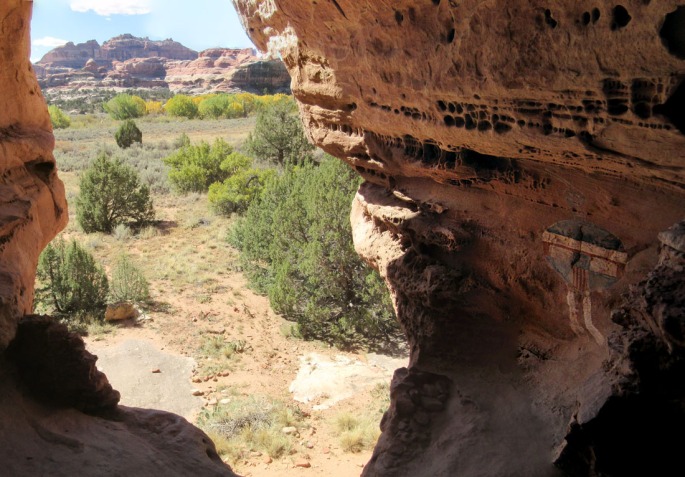 Onwards we passed an empty tent at campsite SC3 – our first sign of others down in Salt Creek Canyon. More great iconic rock art with the ‘4 faces’ and some weird figures that appear to be smiling – or maybe not? 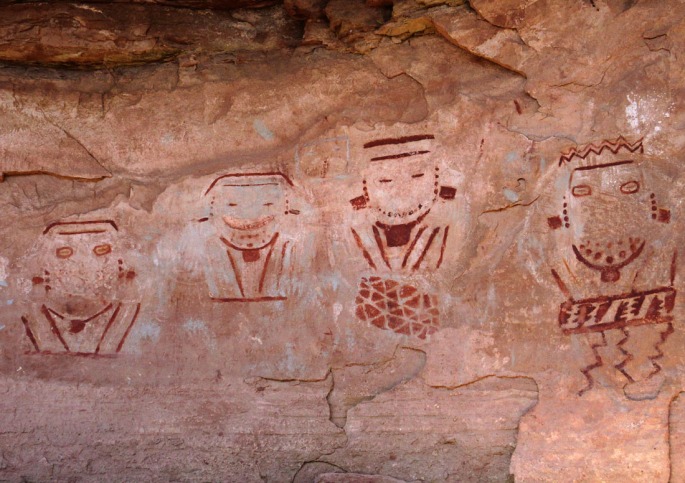 We hit some really thick bush and managed to lose the trail bushwhacking down near the riverbed. With some steep scrabbling up steep mud cliffs pulling up on bushes,we picked up a trail again. Lots of coyote and bear scat on the trail as well as some tracks as we eventually arrived at our campsite (SC4) above a tight river meander with steep coloured walls on either side. What a great relaxed day, mixing hiking and exploring ruins! 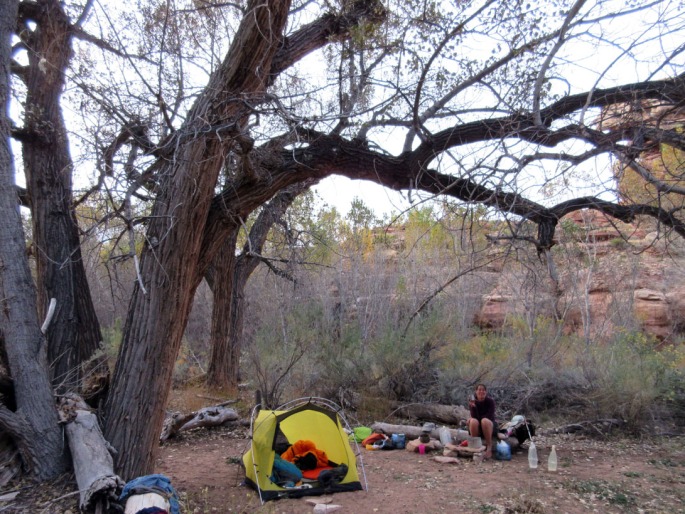 Friday 14th October 2016 Coyotes heard again through the night under a bright moon. Today we simply turned around and headed back up the canyon, which was not going to be a hardship given how wonderful it all was yesterday!

We found a cliff dwelling site just to the south of our campsite around the first river meander which we nicknamed ‘cave ruins’. Here there were stone buildings spread along a ledge system nestled under huge overhangs in another superb position. One pictograph had a line of people holding hands in a stylistic way. Our main find was a granary sheltered in a cave with a glorious outlook and beautifully reflected red colours. 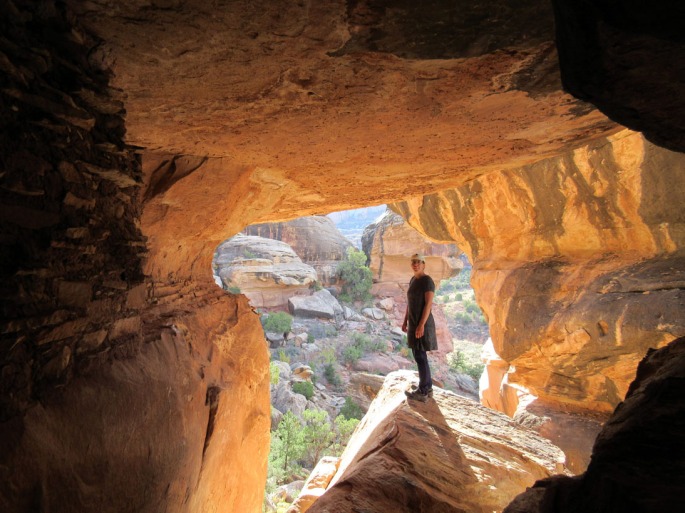 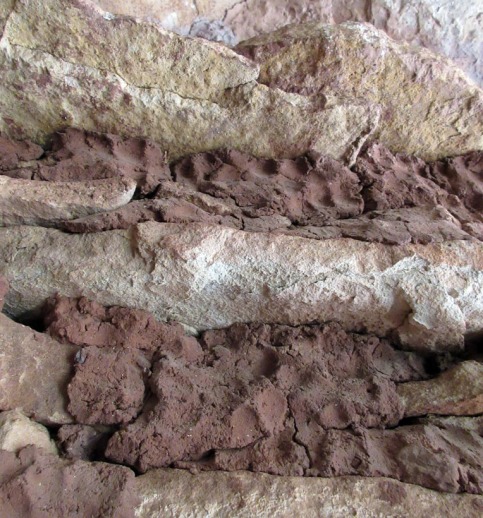 After spending a while exploring around the ledges we moved on southward up Salt Creek – this time managing to stick to the trail!  The temperatures today were pleasantly cool with a high cloud to block the sun. We came across a bear skull along the way….. 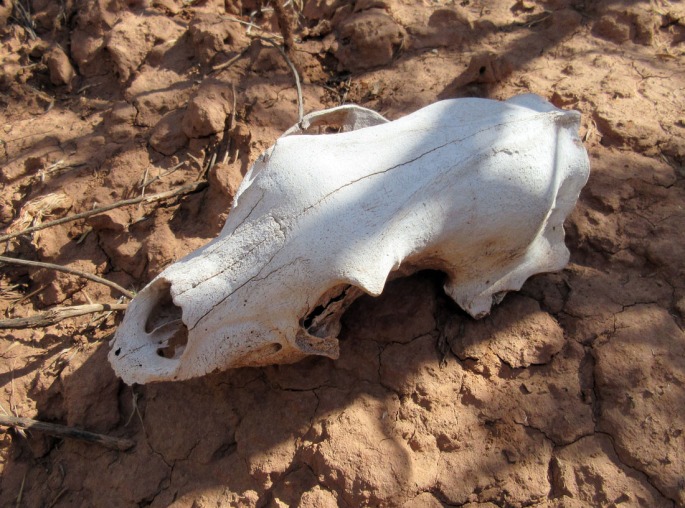 Making it back to the trailhead by about 4.30pm we decided to spend the night camped near to the car with the tent perched on the cliff edge looking down into the canyons below.

With some energy to spare, we spent the evening hiking out about 2 miles to Cathedral Point for even better views across the crazy canyons and coloured slabs in this area. There are lots of potential hiking trips to be done here with Lavender and Horse Canyons and the mesa’s between looking particularly good.

Back at the car we had a lovely camp meal of Mexican rice, beans, salsa, tortilla and topped off with some Uinta Heiferweizen beer!

Saturday 15th October 2016 After driving back to the Needles visitor centre we went out on a day hike to the north end of Salt Creek on the ‘Peekaboo trail’.  It would have been nice to have thru hiked the length of Salt Creek but it would have involved some difficult logistics getting from one end back to our car so hence our separate hikes from either end of the canyon.

Peekaboo is a tremendous trail with much of the hiking on ‘slick rock’ slabs and panoramic views out to the rest of Canyonlands. There are some easy scrambling sections including a couple of ladders to cross short steep sections. We made it out to Salt Creek to visit another interesting pictograph panel of two ‘turtle shaped’ figures. We returned the same way but all in all it was a fantastic day out! 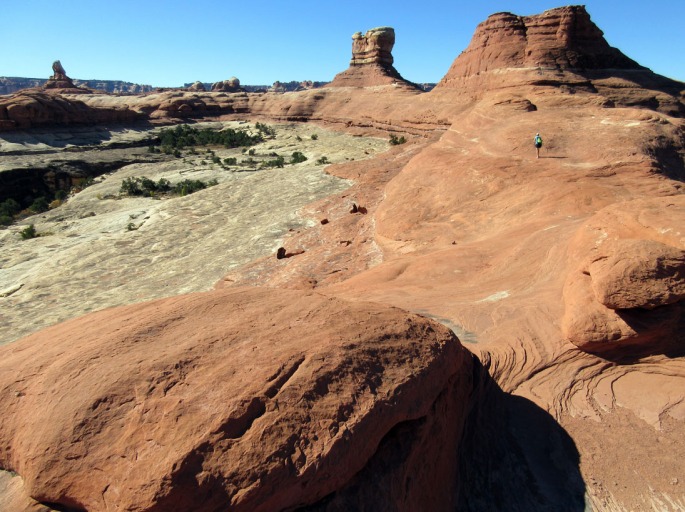 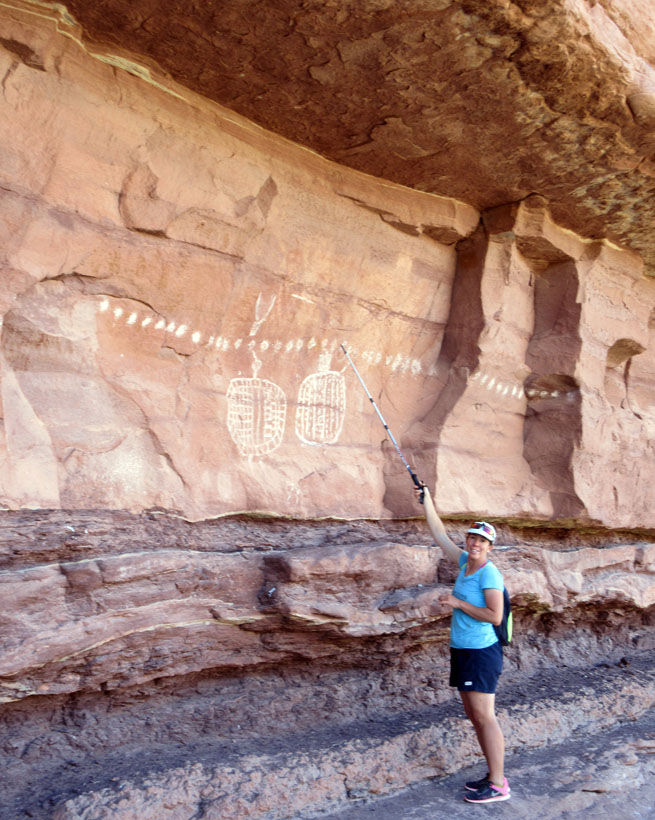