Slickhorn and East Slickhorn are remote canyons in Cedar Mesa country in southern Utah, with the nearest towns being Blanding and Bluff. Less visited than the more famous nearby Grand Gulch, even our canyonlands bible ‘Canyon Hiking Guide to the Colorado Plateau‘ by Micheal R. Kelsey (must buy if you are interested in exploring the area) has this to say- ‘Adventurous hikers may be able to hike all the way to the San Juan River (?) in either of these 2 main canyons, but the author still hasn’t done that, and hasn’t heard whether or not you can make it‘.

However we had looked at the excellent trip reports from Roger and Susie on the Two Hikers website where they describe a backpack down these canyons in 1997 confirming that, not only is it possible, but that they had an excellent hike as well.

The canyons had the attraction of being seldom visited, rugged, and able to be hiked in a loop by joining the canyons with a hike alongside the San Juan river, one of the major rivers of the south west and itself a feeder of the Colorado River. In addition the canyon’s and their tributaries contain a large number of well preserved Anasazi ruins. We were sold!

Thursday 12th October 2017 We headed east on the road through the beautiful, wide spaces of the southern part of Bears Ears National Monument. This is wild country with few cars, distant rocky buttes and no houses. Stopping off at Kane Gulch visitor centre as we needed a permit for the backpack, Brian asked about potential water sources in East Slickhorn (as this was a particularly dry autumn) but the ranger had no information as ‘no-one goes down there’ -excellent!  Another drive down tarmac then dirt road to the head of ‘Slickhorn 2’ and we parked under some junipers to shade the car.

We started hiking south on a sandy dirt road for about 4 miles before splitting to cross country into the head of East Slickhorn. Firstly on easy slickrock with bits of scrambling including a dryfall avoided on the right (right down canyon or west). We carried water with us but there were some intermittant pools of water every 20 minutes or so on the way down although they gradually got worse and disappeared as we descended. A nice set of ruins on a ledge on the western slopes was a good excuse for a stop before the heat drove us onward.

From there the going varied between nice slickrock, boulders, bushwacking and a little trail- never too desperate though and we made good steady progress. Nearing the bottom of East Slickhorn we began to get nervous of not finding any water but eventually found a tiny spring seeping onto the slabby canyon floor. Also we lucked out to find a boulder with a flat top to camp on with views down to the rocky slopes of the San Juan! Bats all around in the evening- a nice start to the Slickhorns.

Nice slickrock at the top of East Slickhorn

Friday 13th October 2017 We headed down the right (west) side of the canyon on steep bouldery ground initially for about 40 minutes to pick up an old mining track that contours round the north side of the San Juan on terraces about 750 feet above the river. Found a couple of petroglyph panels on the sides of huge boulders on the way.

The mining track made for a superb panoramic hike west along the San Juan river – winding its way in and out of side canyons with huge cliffs and escarpments all around. Had a grand food stop above a steep drop to the river across from ‘Government Bird’ rock- a feature across on the other side of the river. It was dry up here but good campsites on the terraces are everywhere! Continuing on we made it to the end of the mining track above the confluence of Slickhorn canyon with the San Juan.

Another useful old mining track zig zags down to the river here and we saw a canoe group packing up and floating off far below. Our aim was now to head up Slickhorn canyon and we picked up a faint track contouring north into the canyon. Eventually Slickhorn canyon bottom came up to meet us and we were able to scramble down into the canyon floor after about 2km. We sat for late lunch by a shaded pool in an idyllic spot.

Went for a short explore down canyon to the confluence of ‘Hanging Canyon’ and Slickhorn where in 1997 the ‘Two Hikers’ had visited a huge 30m wide pool. Today there was a rather stagnant looking small pool of water unfortunately. We took 4 liters water each from another trickling seep a short distance up canyon and then continued upwards. The going got much tougher and hotter with scrambling over and round boulders and with the now heavier loads. Passing the first canyon to the east at 4.30 we scrabbled up further over some massive boulders and found a flat sandy spot under a cottonwood for a dry camp. An excellent varied day! 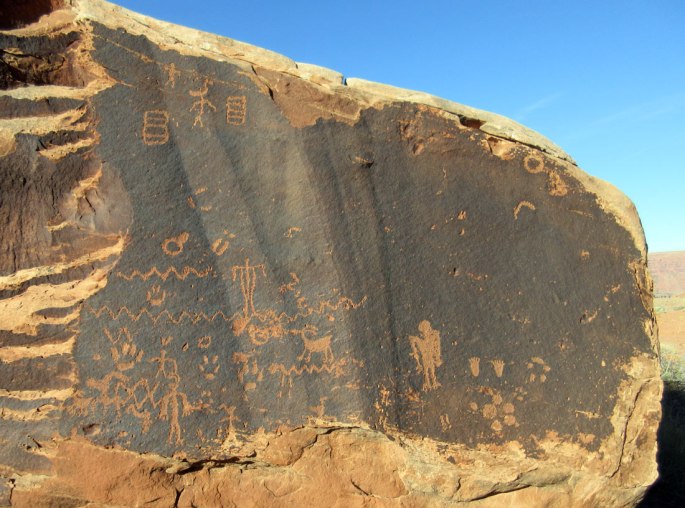 On terraces above the San Juan

Saturday 14th October 2017 Lovely warm still morning and we are off at 8am. The going eases with some trails appearing in the canyon bottom. Stopping at the junction with Trail Fork, we leave some spare gear under a juniper to explore (flat spots for camping here). Trail Fork is rather beautiful with big cedar mesa canyon walls and a slick rock wash. Looking for a site called ‘Big Ledge Ruin’ we get a bit lost but eventually find a old trail that climbed the south slopes to avoid a dryfall cliff. The ruins are high up on the north side.

What a fantastic location these ruins are in. We scrambled up rock to a long ledge in the middle of steep cliffs with various granaries and kivas. Many had juniper and mud walls  and one at the far west end was in a super exposed ledge with a small well preserved step and doorway. The position overlooking Trail Fork was incredible.

We sauntered back to the gear in the main Slickhorn canyon, had lunch, then headed up. After about an hour we hit the next side opening called 3rd Fork. The Kelsey guide covers this area and water is mentioned so we took water bags with us. 3rd Fork is densely vegetated but we couldn’t locate any surface water. On the way we visited a tiny 2 storey granary and wooden kiva, but in the hot sun now these were a little less interesting to us than Trail Fork!

With only 200ml water left between us we now started looking in earnest for water! Martina headed up 2nd Fork whilst I searched up Slickhorn itself but with no luck. Having seen some minor potholes earlier in the afternoon we opted to head back down Slickhorn. At about 5.30 we came across some minor pools in the rock and Martina filtered the water through her neckerchief with great results! Set up camp nearby in a small side canyon north of Trail Fork which had a relaxed open sort of ambience. 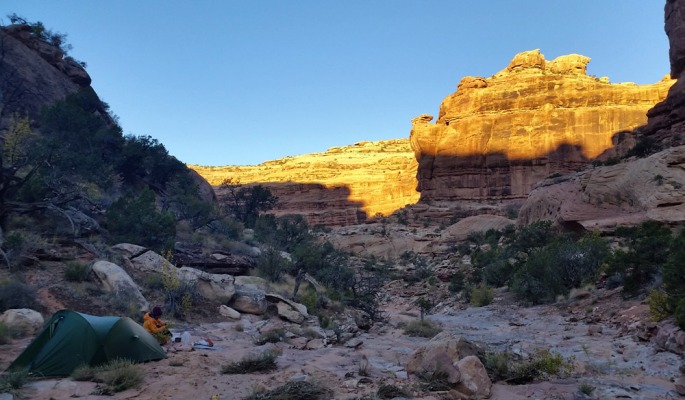 Sunday 15th October 2017 The temperature dropped to freezing overnight but the sun soon hit the walls above and warmed us up. Hiking back upstream we explored the western walls opposite 2nd Fork to find some nicely sited ruins on a slabby ledge about 100 feet up from the floor (blog post banner photo). Just uphill a few minutes we followed a faint side trail to more ruins and petroglyphs. The hiking mellowed out somewhat above with some particularly golden groves of cottonwoods. Scrambling up the west cliffs again we found the ruin named ‘Perfect Kiva’ in guidebooks where we used a wooden ladder to descend inside.

We were now near the head of Slickhorn Canyon and, after some exploring picked up an interesting exit trail that climbed steeply before traversing some tremendous undercut slabs at the top of the canyon wall. What a trail! Easier sandy washes then took us to the Slickhorn Trailhead and all that was left was 45 minutes of sandy dirt road back through pinyon pine forest to the car. A fantastic, varied short backpack. 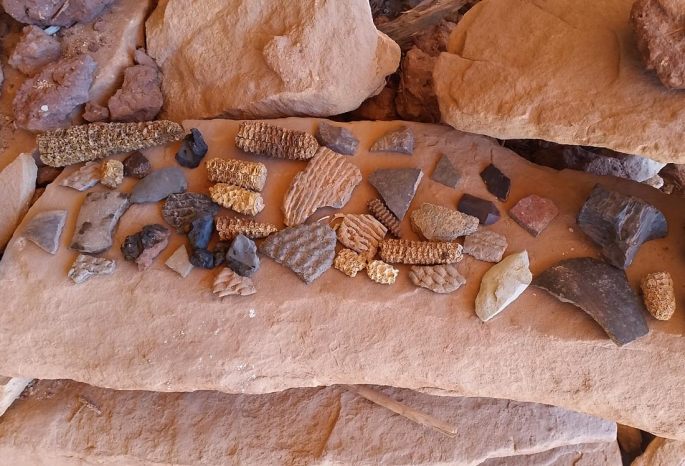