Monday 8th October 2018 We sat out a day of rain in the town of Panguitch (rhymes with sandwich! and is an Indian word meaning ‘Big Fish’) with it’s cool brick built Mormon centre. The weather looked better further south around Zion National Park the next day so we headed down there intending to do a long version of the classic hike on Angels Landing. However there were massive crowds in the park- queues of cars, no parking available and then queues for the shuttle bus to take people to trailheads. We got ourselves out of there quickly as this was not our idea of fun! Finding a café, we pulled our maps out and came up with another 2 day hike outside the park to an area we had briefly visited last year – Canaan Wilderness. I turned out to be an excellent choice!

Parking near the hamlet of Rockville just south of the Virgin river, our aim was to walk south for 2 days over Canaan mountain and end up at the towns of Hilldale/Colorado City. This is a long way by road from our start point so the downside of the cunning plan was the need for a long hitch hike on two roads back round the mountain range to the car. Anyway, that was for later and we set off on a dirt road then a good trail through cactus, pinyon and juniper uphill to an area called Eagle Crags. There were clear, red rock views over the tree canopy north to Zion Valley and the steep enclosing mountains.

After Eagle Crags a fainter trail continued south marked by cairns but was slow going in and out of numerous gullies. The trail soon headed steeply up through a band of cliffs to pop out on a broad ridge. The markers disappeared here and we headed cross country south with a little scrambling down into and across a sage brush valley and then up slickrock on the other side before entering the ‘Sawmill Spring’ drainage with its beautiful slickrock dotted with ponderosa pines. Time was getting on and we were able to find a good campsite on the flat rocky slabs perched above the wash. With some large potholes full with water below us and grand views it was another great camping spot. 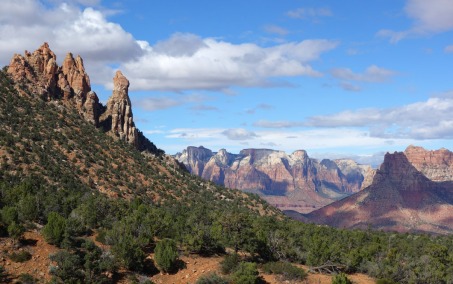 Tuesday 9th October 2018 After a frosty, still night we headed up ‘Sawmill Spring’ drainage again to scrabble up through thicker brush at the top past Sawmill Spring itself. We missed the spring but soon found a track heading along the slabby watershed. We were in Canaan Mountain Wilderness and vehicles are banned here, so it was disappointing to see fresh ATV tracks. Nevertheless it was grand country and a point of interest was an old desiccated wooden ‘Windlass’ used to winch logs down the 1000 foot sheer rock face to the plains of the Arizona Strip below. Peering out south here we could see the land rise to the North Rim of Grand Canyon many miles to the south. 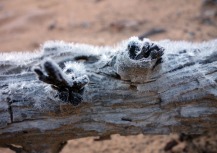 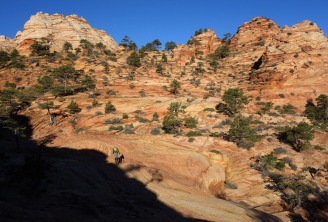 The trail continued on a mix of sand and slickrock until we arrived at the ‘White Domes’- we had camped here last year but it was no hardship to visit this stunning series of rocky domes again, this time with the strong midday sun and deep blue sky adding to the scene.

We crossed more stunning slickrock before descending down into green, lush Squirrel Canyon and its running water. Last year at around the same time, the foliage was bright and autumnal but strangely this year everything was still green. Squirrel exits into the lower valley at Short Creek and we continued downstream next to the running water. All too soon we were on tarmac heading south for the town of Hilldale on the Arizona Border.

We had an amzing set of three hitch hikes in very quick succession (thanks everyone!) back to Rockville and learnt a fair bit about the history and changes in the Mormon township of Hilldale/Colorado City! We had time to visit the cemetary and Ghost town of Grafton – with some fame in that the bicycle scene in Butch Cassiday and the Sundance Kid was shot here.