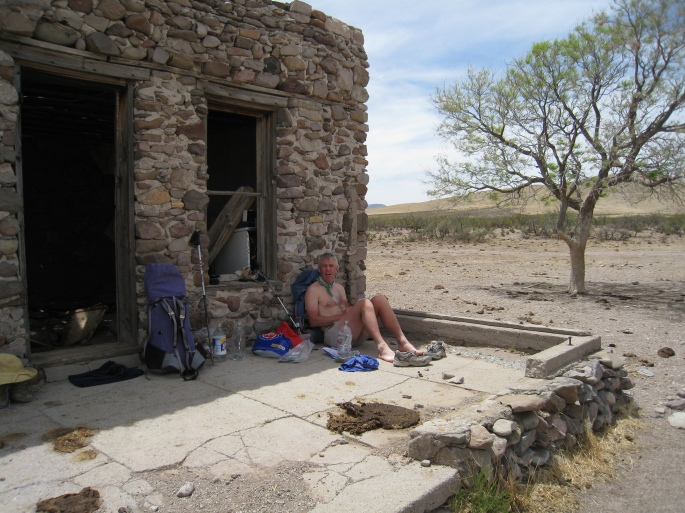 5:30 am – the wristwatch alarm bleeps inside a 2 meters oblong bubble of green fabric that has sprouted overnight between the Yukkas and spiny bushes. The dark night sky is being pushed away by brightness in the east and a few late coyotes are having a final sing along in the distance.
Birds are singing joyfully in the thorny bushes, doves are cooing softly. Rustling of down sleeping bags, groaning. Then the hissing of a camp stove and water poured into pots. The sky is growing lighter by the second. 30 minutes later the sun’s rays are hitting the tent and we finish our tea and start packing up for another hot day walking in the desert. 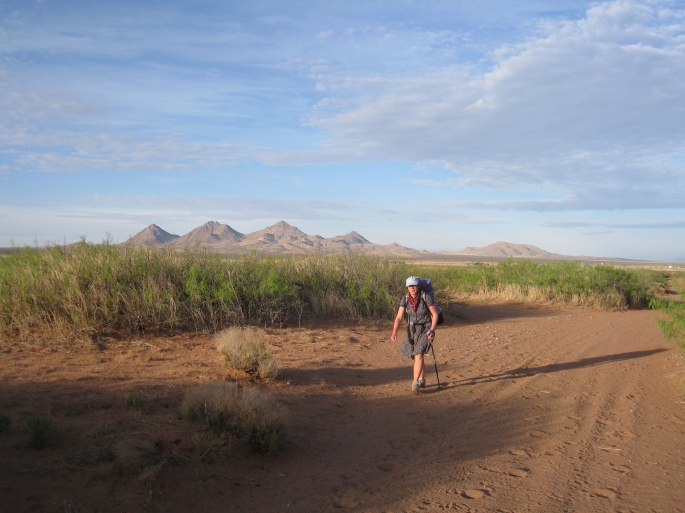 Birds are singing, quail are hooting, ravens and vultures are out, checking if anything has died in the night. We start walking at 6:15 while it is still reasonably cool. By 10:00 it gets hot. By 12:30 -13:00 we stop to rest in whatever shade is available. It doesn’t cool down again till darkness falls at 19:30 but we start walking again between 14:30 and 15:30 just because we need to make the miles.

The route goes between water sources which have mostly been tanks and troughs installed by cattle ranchers for their cows. Groundwater pumped by windmill or solar energy to the surface. Not always great: one time we had to lift green fibrous algal matting off a low trough to get to the murky green water (see photo below). Another time a swarm of bees had taken up residence in the opening of a tank and water had to be got with a cup tied to a long stick (and a steady nerve)- see photo above. On two occasions, the friendly people of New Mexico who live in these remote parts (a weathered cattle farmer and a couple of very friendly self-proclaimed “Hillbillies” with a Harley Davidsons in their living room – I am NOT making this up) have allowed us to use water from their private supplies (garden hoses) which was deeply appreciated.

Only the last couple of days have we been getting out of the desert and up into the hills. As we were uphilling, the junipers got taller, were joined by different types of pine and finally aspen. Cactus gave way to shrub oak.

We even saw some flowering strawberries and lupins. The trails turned from jeep dirt roads into single file paths, it got cooler and shadier. We even found a towel size patch of snow near our highest stop so far : a fire look out on Hillsboro Peak at 10,010 feet (or so the sign said).

On Hillsboro peak we slept in a bothy and were very kindly received by the fire warden for coffee in the morning – AND he made us sandwiches to take for lunch that day!

Yesterday we were excited by our first running water in a stream bed.

The two times we have hitch hiked (to Hilsboro to resupply and into the town we are in now) the first car going our direction has stopped. People are incredibly friendly and helpful. It has been almost overwhelming!

Now we are in Silver City, NM, where a bike race is going on (the Tour of the Gila). Apparently Lance Armstrong is amongst the riders. The town is lovely and has lots of cafes. We are hoping to continue on Monday towards the Gila river (lots of WATER!!!).